Advertiser Disclosure
Lawn & Garden How To Create Your Own Japanese Garden

How To Create Your Own Japanese Garden

Wouldn’t it be nice to have a place to relax and feel peaceful—maybe even downright Zen? That is exactly what happens when you create your own Japanese garden. Japanese gardens are created to be spaces of meditation and reflection. What began as a space made for Japan’s ruling elite to find calm within the storm of their country’s strife and war, has transformed overtime into a way of life and deep-rooted culture.

Therefore, it’s not hard to understand why the idea of a Japanese garden would be such a beneficial export. In a world that moves quickly and in lives that can be beyond stressful, having a place to unwind, and even find inspiration is more important than ever.

While each and every attempt at this type of landscape is going to be slightly different depending on who is creating it, the theory behind the garden should be consistent — Creating your own haven of Zen.

Learn the basics of a Japanese garden 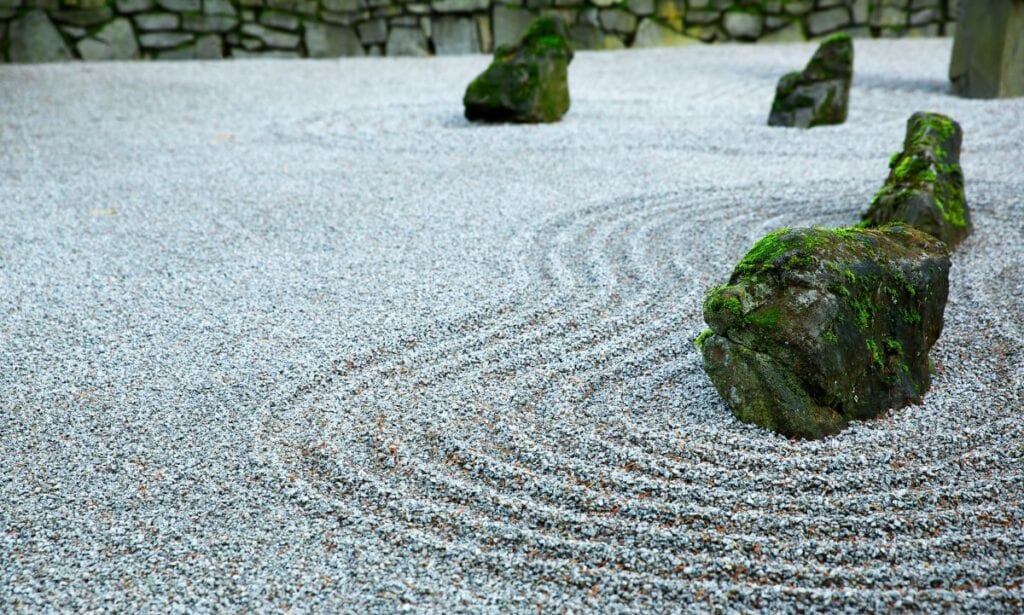 There are very few people in the world – only about 100 to 200 – that have actually created a Japanese garden in its truest form, according to the curator of the Japanese Hill and Pond Garden in Brooklyn, New York. In order for you to come as close as possible to the real thing, or at least gain some inspiration based on this style, you must first understand the basics.

The first type of Japanese garden you want to consider is a rock garden, which often includes the element of sand. This form contains no water element, and is designed to portray a scene of mountains and rivers. Sand gravel raked into a particular pattern is meant to symbolize the river, while rocks placed on the sand symbolize mountains.

The next type of Zen garden you can create is referred to as a moss garden. Moss thrives in Japan’s naturally humid and rainy climate, but interestingly enough, moss doesn’t need a lot of rain to flourish. This means that it can easily be incorporated into gardens in variety of regions. Moss gardens establish a soft and balanced feel that is meant to comfort a burdened mind and body.

It’s important to remember that while each of these gardens is a reflection of Japanese culture, your own Zen Japanese garden can be a hybrid of the calm that speaks to you. Whether you decide on a rock, moss or even a pond garden, the purpose of the garden must be clear—Zen.

Stay true to the culture of a Japanese garden 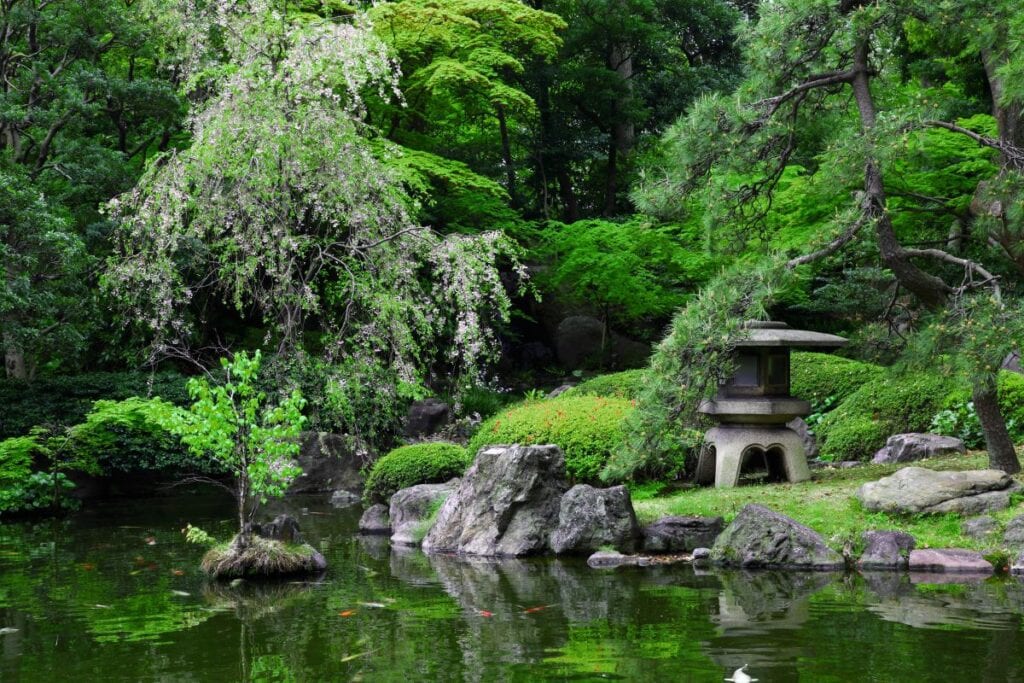 If your goal is to create a true Japanese garden, it’s going to take a little education to stay loyal to the culture of this creation. While it’s tempting to go with cliché ideas of what the garden should look like, many of these preconceived notions tend to come from Chinese culture. Additions such as red hanging flowers and bridges covering small streams are all actually derived from Chinese traditions and often mistaken for Japanese.

While many of these features have in fact, influenced Japanese gardens over time, a true replica will not contain flashy or bright colors. Instead, monochromatic green is preferable and used as a primary palette.

When it comes to flowers, they are not out of the question. It’s just important to recognize their role in the garden and your journey towards Zen. Flowers can be colorful, but not so colorful as to be distracting. Above all, the Japanese traditions calls for flowers to work towards highlighting the green that acts as the balancing color of the garden.

In addition, garden arrangement is going to be key. The thought process behind a garden such as this is that every little detail is a symbol. The entirety of the landscape is meant to work towards creating Zen, which means everything serves a purpose.

Keep it simple and small 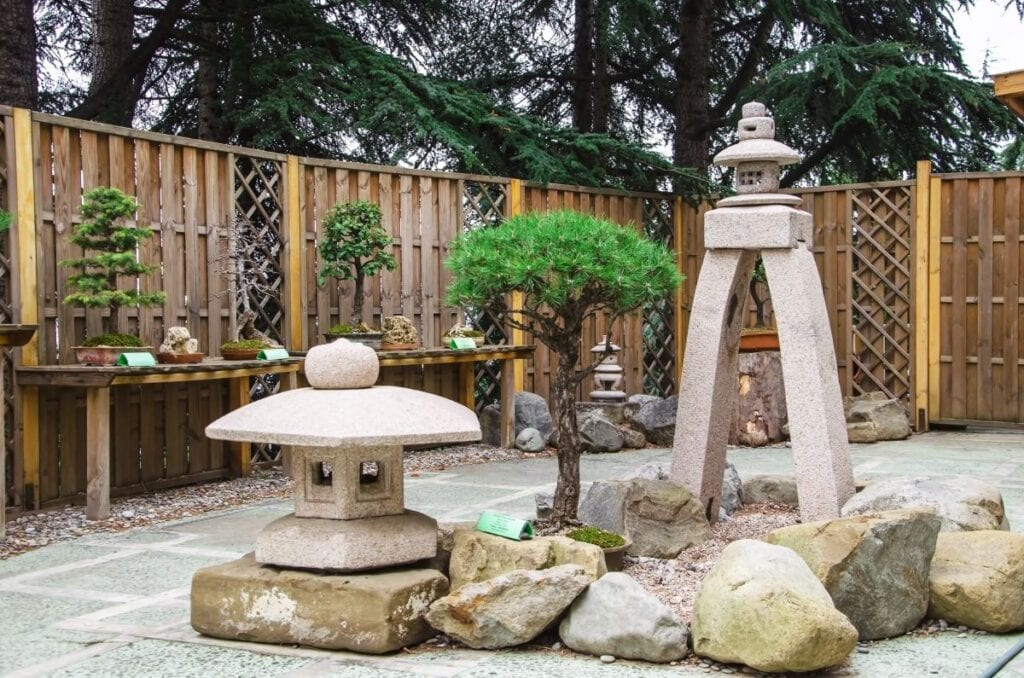 A Japanese garden is not an exercise in creating the biggest and the best. Put all glitz and glamour aside, these gardens are a testament to simplicity and purpose. For this reason, keeping your design simple and small actually works best towards a successful final product and space.

Using materials that incorporate simplicity is a great first step. For example, a bamboo fence that acts as your garden’s perimeter is a natural and easy way to boost your garden’s meaningful design. A renewable resource (bamboo) that seamlessly incorporates nature into a crafted space is the ideal scenario for any garden.

Small stone pathways that wind past concrete statues or icons that speak to your goal of Zen are another peaceful tactic to incorporate. These winding stone paths have long held with the Japanese belief of anticipating what’s waiting in the future while simultaneously respecting your past. Isn’t that a beautiful way to look at life?

Similarly, don’t feel pressured to incorporate a large variety of plants into the garden. Sticking with two or three essential mossy or crawling plants is not only an easy way to maintain the garden, but keeps lines simple. A garden that is crafted with simplicity of design in mind is going to allow a mind to unclutter more easily than a space bursting with plant life.

Creating a Japanese garden of your very own may seem like a simple idea, but the reality is it’s an art form that must be studied in order to be perfected. Fortunately, these gardens have been around and beloved for centuries, meaning the resources are endless for those who want to attempt to design a Zen oasis of their own.

Creating Your Own Japanese Garden authored by Takashi Sawano is a comprehensive look at how design influences the achievement of Zen. Covering topics such as bamboo lines, plant placement and sand essentials, this book will give you a look into the meaning behind the small and important garden details. Online resources are also available such as The Japanese Garden, and are meant to educate prospective garden creators on the specifics that need to be addressed before a garden is even started.

Finally, don’t hesitate to take the time to simply look at the designs that others have done. Looking at what interior design experts have done in the past is a great way to get inspired for the future. Japanese gardens are built on an expectation of calm and inspiration. What better way to make sure your garden is a success than to have an idea of what speaks to you before the shovel hits the ground?

Understanding the ancient foundations of a Japanese garden is the best start when it comes to incorporating one into your own home or life successfully. A bold mix of culture and tradition are necessary when looking to create a space of Zen. This may mean stepping outside of your comfort level and taking a look at your garden from a different angle to get the best results.

While this work of art does take some time to get just right, the benefits of a Japanese garden are worth it in the end. Not only will you have a space that brings you peace of mind, but you’ll have learned a history behind your design, giving your garden purpose that is based in a deep-rooted cultural history.