Want to know the trendiest styles, colors, materials, finishes, appliances and lighting fixtures in U.S. kitchens? Sure, you do! The National Kitchen + Bath Association (NKBA) queried hundreds of designers, remodelers, architects, manufacturers and dealers to discover the most dominant preferences and the biggest kitchen design trends. Freshome asked trend spotter Elle H-Millard, Certified Kitchen Designer and Industry Relations Manager at the NKBA, for photos and insights regarding the key U.S. kitchen design trends.

The 3 Most Popular Kitchen Design Styles 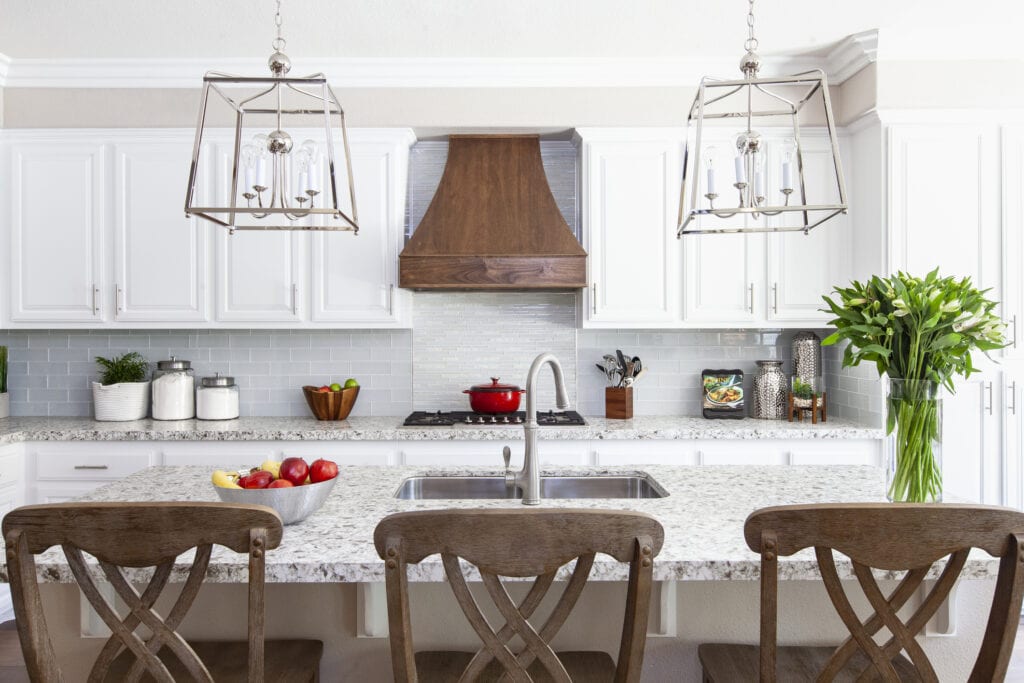 Cavan Images/ Getty Images[/caption] Farmhouse kitchens have emerged as the most popular style. “A signature statement in a farmhouse-style kitchen is the apron-front sink,” says H-Millard. “But let’s not leave out the rugged wood beams and large dining table that give the space its charm,” she says. “Farmhouse style lends itself to a cozy atmosphere with a nostalgic flair.” [caption id="attachment_46343" align="alignnone" width="2121"] 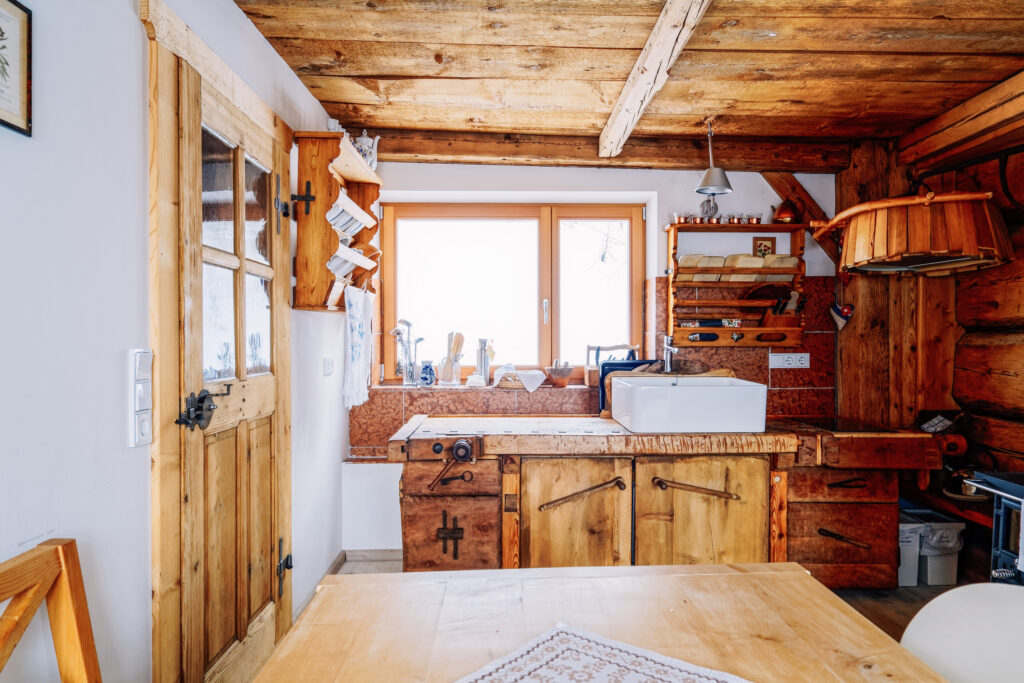 Getty Images[/caption] The second most trendy kitchen style is transitional. “The transitional-style kitchen presents a juxtaposition of contemporary and traditional styles. You might see a mix of sharp lines and soft and delicate curves,” H-Millard explains. “The transitional kitchen evokes both charm and edginess.” [caption id="attachment_46644" align="alignnone" width="2121"] 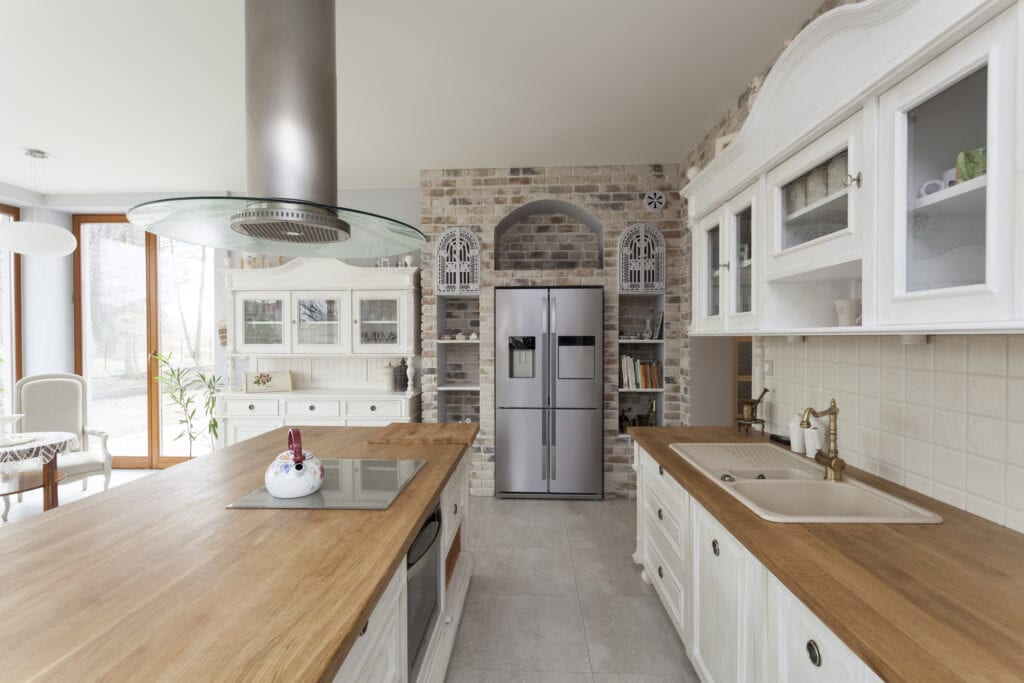 Getty Images[/caption] The third most trendy kitchen style is contemporary. “Contemporary lends itself to a minimalistic look,” says H-Millard. “Often, contemporary includes frameless cabinetry with slab front faces and stark, contrasting colors.” She explains that contemporary kitchens have larger surfaces and are more sculptural in shape and appearance. “Your eye absorbs the entire space as one unit.” 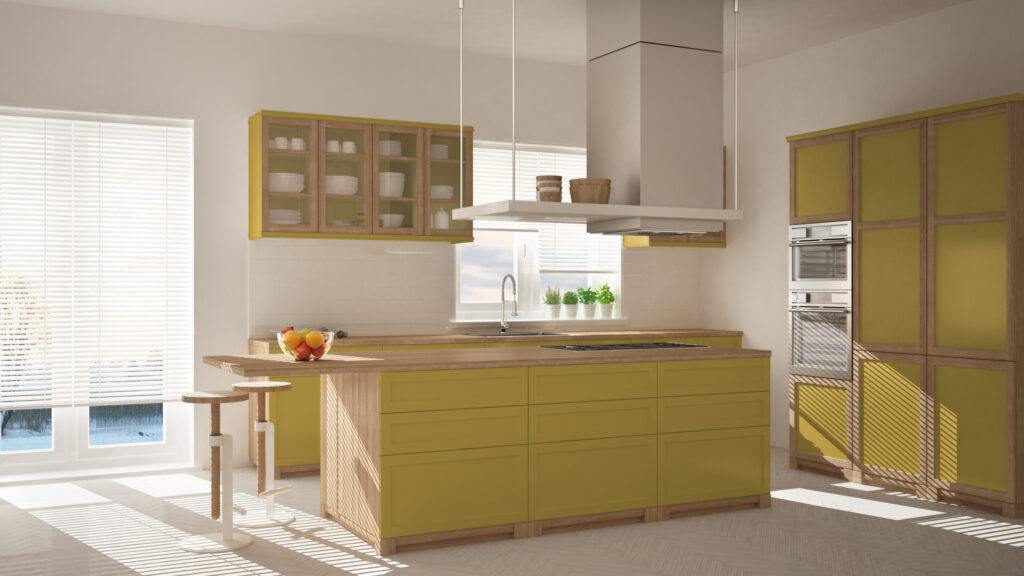 The preferred choice for kitchen countertops is quartz, which is far more popular than granite and marble. Among backsplash choices, H-Millard says ceramic or porcelain tile is the runaway favorite, followed by glass, natural stone tile and quartz. [caption id="attachment_46712" align="alignnone" width="2100"] 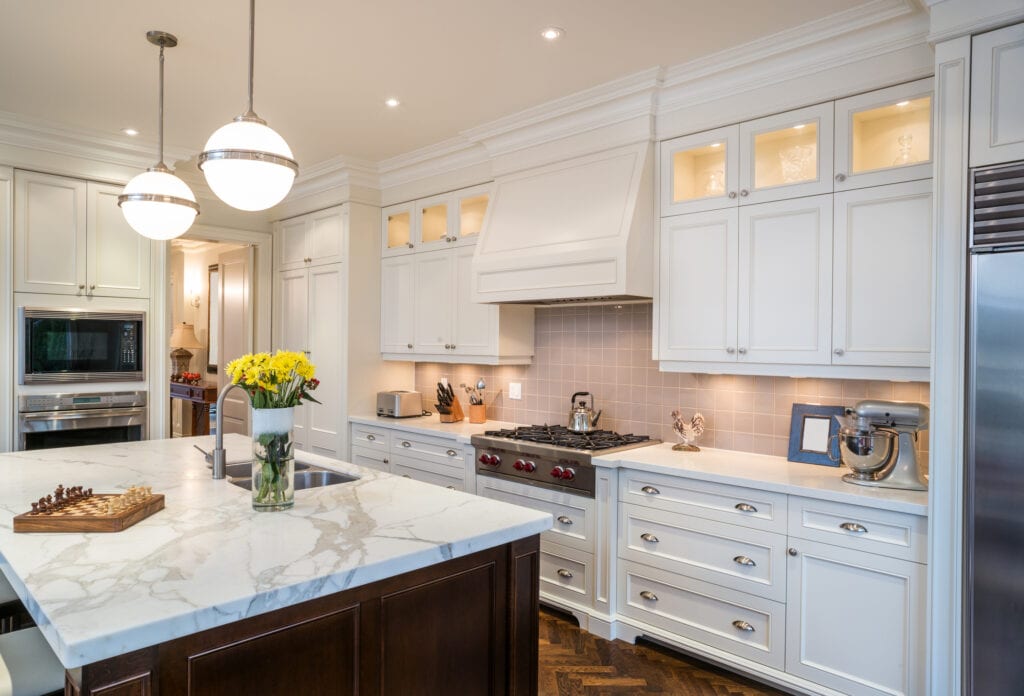 Getty Images[/caption] Regarding flooring, hardwood floors continue to reign. However, ceramic and porcelain tile are also popular choices. Engineered wood is the third most popular choice.

Trends in Sinks and Faucets 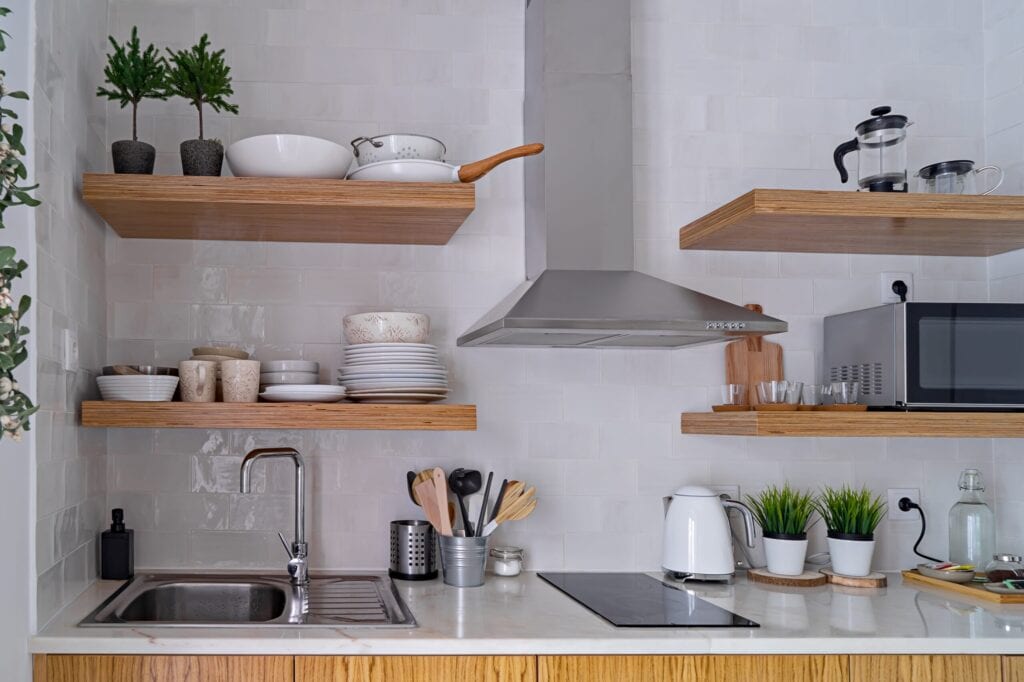 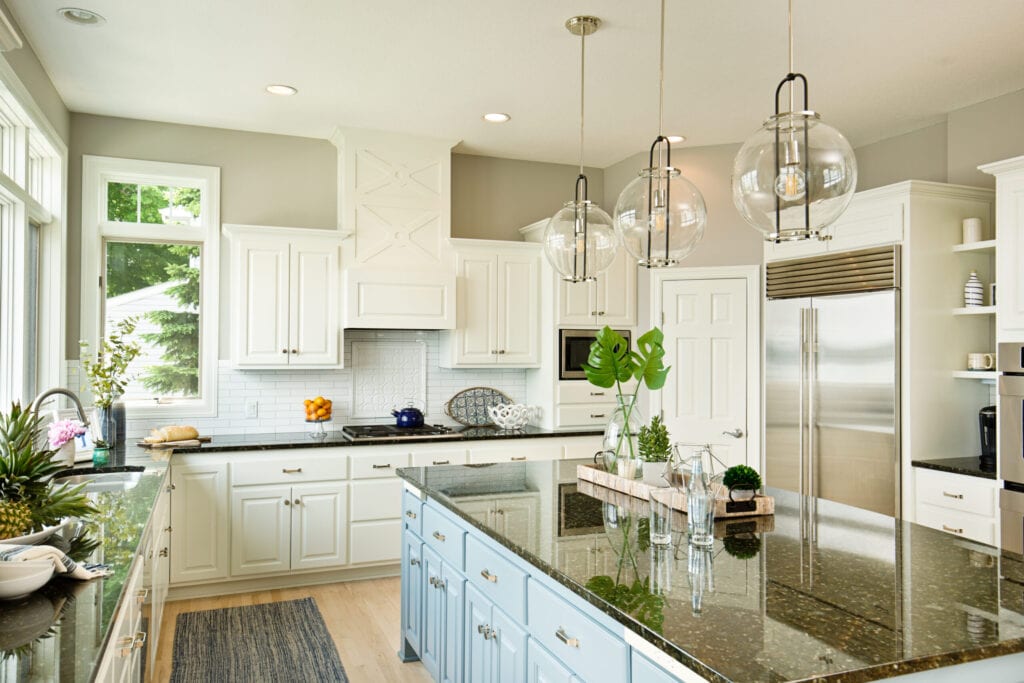 yinyang/ Getty Images[/caption] While there is no runaway favorite in types of refrigerator/freezers, refrigerator column/freezer column combos are most popular, followed by single-door refrigerators and single-door freezers. The French door style is the overwhelming favorite, followed by under-counter and bottom-mount styles. Gas cooktops, convection ovens and microwave drawers are the most popular cooking appliances. In second place: induction cooktops, gas ranges and warming drawers. Double wall ovens are also popular. 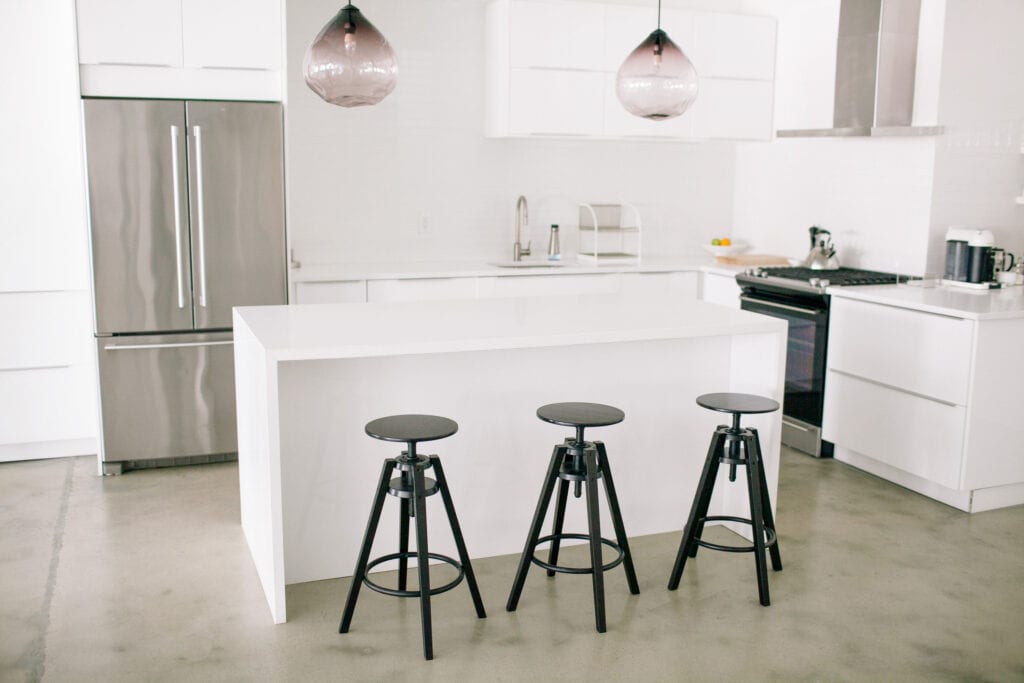 [caption id="attachment_47190" align="alignnone" width="2121"] ExperienceInteriors/ Getty Images[/caption] Several kitchen design trends are gaining traction, according to H-Millard. Some of them include space-within-a-space concepts, such as a homework station or a desk area in the kitchen. “Other emerging trends include custom hoods, island prep stations and French door ovens that open horizontally instead of vertically.” She says that appliances are taking center stage. “We are seeing jolts of color and varied metals and finishes.” Technology will also play a larger role in the kitchen, thanks to the increasing ease of wirelessly connecting to smart devices via apps.