You’ve spotted the pests plaguing your home: they look like ants with wings, but what are they actually, and how do you get rid of them?

Unwanted bugs are definitely a problem you need to solve. They can harbor disease and damage your home. You could call in reinforcements: pest control specialists know their stuff and can give you some peace of mind that the critters won’t return. But if you can DIY this issue, you could save a bundle of dough, and learn the skills you need to deal with it in future years.

It doesn’t make sense to throw all your bug-zapping artillery at the intruder when a simple solution might do the trick. To know what to do, you’ve first got to name your enemy.

What are ants with wings?

Wings emerge on almost any type of ant at certain times of the year. During these times, colonies send out swarms of reproductive males and females to find new nesting areas and procreate to form new nests. Once they’ve landed and found a new home, both males and females will shed their wings and carry on their lives.

Many people don’t realize ants can grow wings because the whole episode may be over within a day or two and for many species only twice a year during spring and early fall. The ants most confused with termites are carpenter ants because they are a similar size to termites and also tunnel through wood.

All ants can be a nuisance in your home, as they travel common paths in search of food all over your home. Carpenter ants even tunnel in wood, making longer paths than termites. Unlike termites, they don’t eat the wood but leave it behind as a sort of sawdust. That’s not the kind of thing you need in your walls.

Termites are often confused with winged ants but are more likely to damage your building structures if they’re able to get in and get settled. Though they’re more common in the southern states, they can appear nearly anywhere in the U.S. They favor moist, warm environments and will often attack the wood closest to the soil.

Like ants with wings, termites shed their wings once they find a good place to live. Depending on the species, they can range between 1/8 inch to 1 inch long. They are pale in color, in shades of white to light brown.

Is it flying ants or termites?

How will you know if you have ants or termites? First, you can check out the damage in your home to tell which pest you have.

While termites are well known for causing destruction, often, homeowners don’t know they have an infestation until they have an inspection done. One telltale sign of termites is that they sometimes leave mud tubes extending over foundation walls or sill plates. This is the protection they use when leaving an underground space until they emerge in the wood in which they plan to tunnel.

Wood that is termite damaged is hollowed out in line with the grain of the wood, and may have dirt lining larger areas where the termites feed. Carpenter ants leave shavings behind as they tunnel through wood and the openings to tunnels may look like slits. If you see the ants, it’s possible they’re sneaking in through existing gaps and holes and not actually tunneling in your wood.

Termites can damage even healthy, strong wood, whereas ants will stick to moist wood that may already be rotting.

There are some key differences between ants and termites that will help you tell which critter you’re looking at. Ants typically have 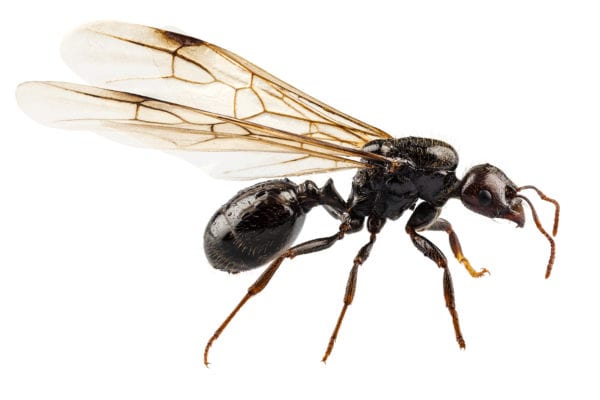 In contrast, if you’re looking at a termite it will likely have:

Termites are less picky about the wood they infest and can attack sound wood in many areas. Termites can be found in all of the U.S. except Alaska, but they particularly enjoy the warm, moist environment in the southern states.

Ants look for soft wood and are often found in shady wooded areas in old stumps, but they can tunnel in the trim of buildings, as well as wooden steps and window sills. They will go dormant in the winter and reemerge in spring. Their primary food is insects, but if they make it into the house, they’ll eat sweet goods or proteins.

You can often find termites tunneling through paper, wood, and even wallpaper. They tend to be well hidden, often just below the surface in many areas of the house. If they must travel above ground, they build tunnels of mud and feces to protect themselves from predators and the outdoors. Called exploratory tunnels, they’re one of the best ways to spot an infestation.

How to get rid of ants with wings

Step 1: Get rid of temptation for the ants

Remove rotting wood from around the house, including firewood and tree stumps. Correct humidity problems in your house, too. Since ants will only tunnel in wet wood, you may have too much moisture inside. Clean up potential food sources and seal food in containers

Step 2: Use an approved pesticide to treat an existing colony

You’ll have to locate the nest to get rid of the source of your problem. You can find the nest by watching ant behaviors and following their patterns. Sometimes you can hear their activity in the walls.

Once you’ve dealt with the problem, continue to monitor your home to be sure you’ve got it all. Then, stay vigilant with step one to detract from further activity.

Learn more about getting rid of ants in your home.

How to get rid of termites

Much of termite control happens during construction, including proper grading and drainage to minimize moisture in the soil, building the foundation from concrete, and leaving space between soil and wood. With an already built structure, be sure to fill cracks in the foundation and thoroughly seal the space around wires and pipes that come into the house. Fix leaks to keep the house dry and keep shrubs a safe distance from the house.

In many cases, you’ll need a pro to handle chemicals that kill termites (termiticides).

Step 3: Maintain your house and landscaping

Continue with step one to keep termites from returning.

Learn more about getting rid of termites in your home.

If you suspect ants with wings or termites are invading your house, there are things you can do to make them feel less at home there. Controlling moisture, attacking leaks and crevices, and carefully controlling the wood in and around your home can protect your house from these destructive creatures. If you suspect you may have an infestation, you might consider calling a pest control service to help you get rid of it for good.

What Pests Come Out in Winter?

Mosquitos, spiders, flies, and other insects are pests you normally think of as summer nuisances. The reason is simple — insects are cold-blooded and tend to be more active in the summer months. However, some home insects are just as troublesome when temperatures drop. There are bugs that bite during winter you should watch out […]