Your Guide to Moving to San Diego

Moving to San Diego at a glance:

Moving to San Diego: The basics

What’s the population of San Diego?

What’s the cost of living in San Diego?

The average salary in San Diego is $53,913. While the cost of living in San Diego is more expensive than similarly sized cities like Philadelphia, Pennsylvania, and Phoenix, Arizona, However, it is significantly cheaper than big metropolises like New York City.

According to the City of San Diego, the sectors that make up the backbone of the local economy are international trade, manufacturing, military, and tourism.

A January report from the San Diego Union-Tribune cited that the lucrative fields of professional and business services have grown the most and added 9,500 jobs in the fields of architecture, engineering, scientific research, and other technical services in 2019. Additionally, the fields of construction, government, and educational and health services added thousands of jobs to the local economy.

If you’re looking to land a job in the city, know that San Diego is also home to Qualcomm and Sempra Energy, which are both Fortune 500 companies.

What do I need to know about education in San Diego

The San Diego Unified School District is the main school district in the city and second-largest in California. It serves more than 121,000 students from preschool through high school. The student population is diverse, spanning more than 15 ethnic groups and 60 languages.

With most schools in San Diego Unified, your address determines which schools your child will attend. The school system also offers school choice for special application-based programs in languages, performing arts, and STEAM magnet schools. Due to the pandemic, the district started the 2020-2021 school year with most students learning in a virtual capacity and in-person classes offered to certain elementary students with particular educational needs.

Out of all the school districts in California, Niche ranks San Diego Unified as the 18th most diverse. It’s also ranked the 55th best school district for athletes in the state, and the 123rd best overall. Torrey Pines ranks on Newsweek’s list of Top 100 Best High Schools in the U.S.

Aside from public schools, there are also 335 private schools throughout the city.

What are the safest areas in San Diego?

The top three safest San Diego neighborhoods are located on the northern and western edges of the city, according to Neighborhood Scout. The site, which pulls data from thousands of local law enforcement agencies across the country, considers neighborhoods surrounding Alameda Boulevard/Palm Avenue, Black Mountain Road/Del Mar Heights Road, and Darkwood Road/Park Run Road the safest in the city.

Neighborhood Scout says that San Diego is safer than 23% of U.S. cities, compared to communities of all sizes across the country. It has lower rates of violent crimes and property crimes than both California and national medians. If you want to learn more about safety in the city, check out statistics and information from the San Diego Police Department.

How do I get around San Diego?

Public transportation in San Diego is known as the San Diego Metropolitan Transit System, or MTS. It consists of buses and trolleys. You can also get around the city with waterfront shuttles, pedicabs, and Amtrak trains.

You can also get around on rented bicycles and scooters with several different services operating throughout the city, but be mindful that there are strict rules and regulations for them.

If you’re looking for sunshine and ideal temperatures, San Diego is where you want to be. “America’s Finest City” boasts days full of sunshine and average temperatures in the low 70s all year round, making it the perfect place to enjoy the outdoors — especially the beaches.

Temperatures don’t vary much among the seasons, but San Diego does receive most of its rain from December through March. On average, July, August, and September are the warmest months of the year.

In May and June, San Diego can experience marine layer clouds that cool coastal area temperatures. Those usually start early in the day and burn off in the afternoon.

What are San Diego’s fastest-growing neighborhoods? 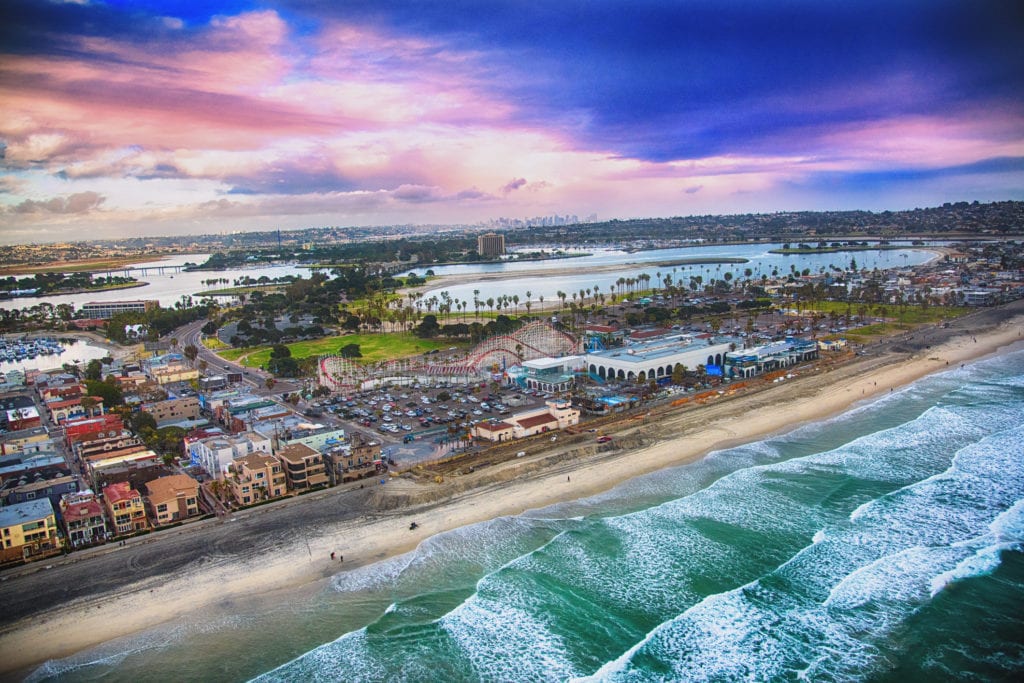 One of the most exciting parts of moving to San Diego is deciding which neighborhood is best for you. In a city that’s growing as fast as San Diego, you have the liberty of identifying the best neighborhoods in San Diego that would suit both your lifestyle and budget. You can also get an idea of where locals like to gather by looking at the fastest-growing areas in and around San Diego.

One of the most exciting parts of moving to San Diego is deciding which neighborhood is best for you. In a city that’s growing as fast as San Diego, there are many neighborhoods to consider for what would best suit both your lifestyle and budget. You can also get an idea of where locals like to gather by looking at the fastest-growing areas in and around San Diego.

This diverse neighborhood in eastern San Diego has a population of 74,062. One of the oldest areas in San Diego, City Heights is defined by El Cajon Boulevard to the north and Highway 94 to the south, with easy access to the city via Interstates 5 and 805. Boulevard Transit Plaza is close by, giving commuters an easy ride into downtown.

According to Niche, Mission Valley is one of the best places to live in California thanks to its diversity, above-average public schools, and family-friendly atmosphere. It is located minutes to downtown near the junction of State Route 163 and Interstate 8.

Mission Valley’s population of 18,890 people enjoys a neighborhood rich with restaurants, bars, shopping, and parks. It’s also the location of Fashion Valley Mall. The median home value in Mission Valley is $475,000. The median rent is $2,042/mo.

This quieter enclave of Normal Heights is located between Interstates 805 and 15. Residents love living here because of its easy access to downtown and the dynamic Adams Avenue, which boasts restaurants, nightlife, cultural events, and festivals.

Young families and first-time homebuyers are flocking to this up-and-coming neighborhood. El Cajon stretches from the city center all the way to the northeast desert.

The San Diego suburb of Oceanside is a multigenerational neighborhood with a creative vibe. Young entrepreneurs are settling down in the area that offers everything from funky mobile homes to high-end coastal houses. 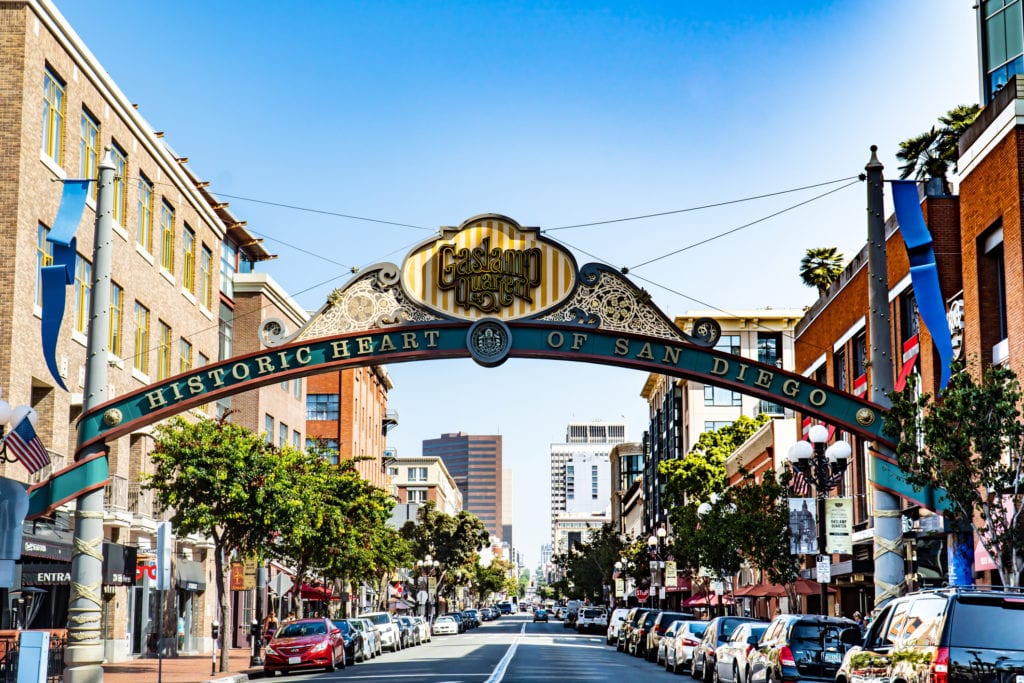 Sports lovers will see no shortage of action in San Diego. The city is home to the San Diego Padres, the major league baseball team that plays at Petco Park. Del Mar Racetrack hosts thoroughbred racing sessions in the summer and fall. Other teams include the San Diego Sockers for indoor soccer and the San Diego Gulls AHL hockey team.

Whether it’s fine art, history, or live performances, San Diego has it all. Culture fanatics can visit 52 different museums and galleries — there are 17 in Balboa Park alone! Families can enjoy the four museums in Balboa Park geared especially for children. San Diego also boasts a thriving live music and theater scene; fun fact — it has produced and sent more shows to Broadway than any other city in the country. The city also has more than 50 music venues to enjoy live shows.

No matter your palate or preference, the city has plenty of dining opportunities for you. San Diego’s shared border with Mexico makes it a top dining destination for tacos of all kinds, ceviche, burritos, and more. The city also boasts a multitude of contemporary and fine dining destinations.

Craft beer is king in San Diego and the city’s home to more than 90 breweries. Wine culture is also gaining momentum, with more than 115 wineries in the county.

If you’re the jet-setting type, San Diego has got you covered. With San Diego International Airport, you have access to 500 daily flights (around 60 of which are nonstop) to both domestic and international destinations.

The Mexico border is only 17 miles south of downtown San Diego and allows you to get the most out of Baja California’s dynamic culture. The region’s top destinations include Tijuana, Rosarito, Ensenada, and the wine-rich Valle de Guadalupe.

From picnicking and hiking to surfing and paddleboarding, you’ll have no shortage of things to do outside. The area offers 70 miles of pristine coastline, 520 parks, 166 hiking trails, and beach-perfect weather nearly all year round.

The city is also a top destination for other outdoor sports such as golfing (it has more than 90 courses), mountain biking, hiking, and even skydiving.

What you probably didn’t know about San Diego…

Every city has its own quirks, history, and inside information that make it unique. Get the inside scoop that will make you feel like a true San Diegan:

If you’re interested in moving to the area check out our city page on San Diego!

If you want to move to “America’s Finest City” and get a sense of what living in San Diego is like, this guide is a great place to start— but it only scratches the surface. To really understand what it’s like to be a local, explore local resources.

Tourism and culture sites like sandiego.org, Eater San Diego, and socalpulse.com can keep you updated on current events. Local news sites like KPBS and the San Diego Union-Tribune can keep you up to date on everything happening in the community.

At the end of the day, you have to determine if moving to San Diego is the right step for you, your family, and your career. The facts and figures above can help you make that big (and exciting) decision.

Claire Ballor contributed to this article

Christina Xenos is a California-based journalist covering dining, entertainment, and culture in the city for more than a decade. She is also a professional chef and cookbook author.