How to Get Rid of Gnats for Good

We’ve all been there — you forget to throw out that old fruit or to take out the garbage and suddenly your kitchen is infested with gnats. But the first thing you’ve got to do before you go about getting rid of gnats is to make sure that the bugs in your home are, in fact, gnats. There are lots of little winged bugs, similar to fruit flies, that can get into your home.

Gnats are small, winged insects that are dark brown and have long, thin bodies. They’re about a quarter of an inch long. They look like small flies but can’t fly well. Fungus gnats, another type of gnat, are black and have long legs.

Gnats fly in large numbers and often occupy soil and other wet areas. Though they’re not necessarily dangerous, gnats are hard to get rid of and are a nuisance. This is why property owners want to know how to get rid of gnats from their yard and home immediately and for good. 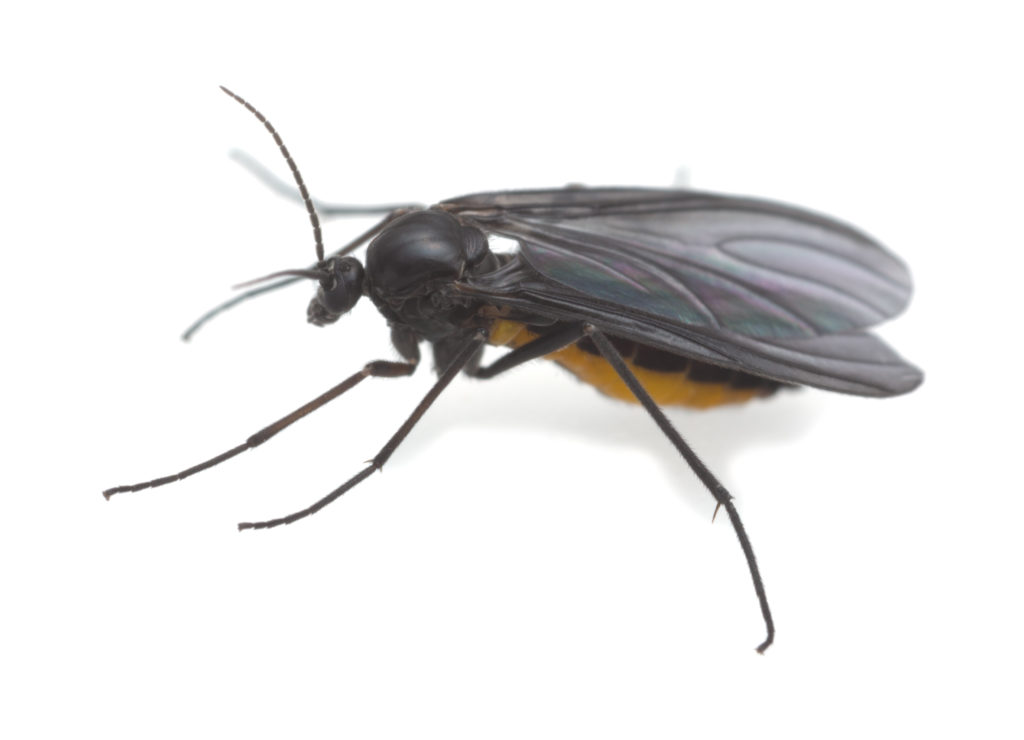 Where gnats come from

Gnats mainly come from eggs laid in unripe fruits. Once the fruit rots, the larvae eat the fruit to grow into adult gnats. Gnats can also enter your home through an open door or window. It’s common to have a few of these insects trickle inside if you have a garbage bin nearby with a gnat infestation.

Gnats can enter your house from outside, emerge from eggs laid in produce, and grow eggs in potting soil. Once gnats are inside your home, they live in decaying matter and moist areas. While most gnats don’t bite, those that do cause itchy bites. Additionally, the eye gnat can transmit pink eye and the fungus gnat can kill seedlings and houseplants by feeding on their roots.

How to check for gnats

To check for gnats in your house, you won’t have to look far. When you have an infestation, you’ll see them flying around in large numbers near rotten fruit, trash, and wet areas. Look for spaces in your home where you may have water damage to check for gnats, such as a leaky roof or crawlspace.

Your pet may also be plagued by gnats. This often happens outside when your dog or cat is playing and encounters a swarm. Gnats also inhabit contaminated soil outside and in potted plants where moisture and fungus can develop. To check for fungus gnat larvae in your yard and plants, slide a few potato wedges into the soil and leave them there for a few days. Then, pull them out to check for larvae — if you see them, then you have contaminated soil.

How long can a gnat infestation last?

A gnat infestation can last as long as the weather is warm and food and moisture are available. Generally, gnats die in cold temperatures and thrive when temperatures are between 75 and 80 degrees Fahrenheit. It’s possible for gnats to continue to live indoors in off-seasons if they find a warm and wet place to thrive.

How to get rid of gnats, step by step

Getting rid of gnats has everything to do with consistent removal efforts. Check out these steps to learn how to get rid of gnats in a few easy, streamlined ways.

Throw out rotting fruit, fix leaks that cause moisture in the home, and get rid of contaminated potted soil. To check for contaminated soil put a few potato wedges in the pot. Check them after a few days to see if you have gnats or larvae.

Use an indoor insecticide like Hot Shot Kitchen Bug Killer to kill gnats on sight. Set gnat traps to capture the remaining gnats. For the most effective results, place several around your house.

Step 3: Get rid of gnats in potted plants

Remove contaminated soil and place a trap in the new soil, such as Garsum Yellow Sticky Stakes.

Step 4: Get rid of gnats outside

Change out potting soil that has larvae in it and use a permethrin-based insecticide like Martin’s Permethrin 10% Multipurpose Insecticide and an insect growth regulator like Pivot 10 IGR. To help these solutions work better, aerate your lawn with a manual aerator.

Clean up dirty dishes, clean trash cans with bleach and let them dry, and trap gnats until they’re gone.

Products you can use to treat a gnat infestation

Home remedies to get rid of gnats naturally

There are quite a few home remedies to get rid of gnats naturally. These home remedies usually involve attracting gnats with a decaying or sweet, fermented liquid to trap and remove them. For example, fill a cup with apple cider vinegar, 1 tablespoon of sugar, and a few drops of dish soap and cover the cup with clear plastic wrap. Poke a few holes in the plastic with a pen and leave it in the affected area. Gnats will collect in the trap and die. Placing several traps in different locations is the most effective way to get rid of gnats.

How to keep gnats out of your home

To keep gnats out of your home, you need to make it a place that gnats don’t want to be. Take away moisture, food, and shelter and it’ll be hard for gnats to thrive. Don’t leave out any food or dirty dishes overnight. Be sure to leave your sink and kitchen area free of food that can attract gnats. Take your trash out regularly and cover all wastebaskets.

Be sure to clean your trash can once in a while to get rid of bad smells and rotten food juices that gnats love to eat. If there are any leaks or damp areas in your home, resolve these problems as soon as possible. Finally, if you have potted plants that are harboring fungus gnats, get new potting soil.

The bottom line on gnats

Gnats are bothersome, common household pests that are drawn to damp areas and rotting food. To keep them out of your home, remove anything that attracts gnats such as rotting fruit, poor quality potting soil, dirty dishes, and festering trash. Setting a sticky gnat trap or a home remedy natural gnat trap can also reduce numbers and infestations as you deal with the issue.

Gnats are also attracted to poor soil with inadequate drainage outside. To resolve the issue, aerate your lawn every year, replace poor soil with fresh soil, and apply a pest killer to the ground.

Can gnats bite you?

Yes, gnats can bite you — but only certain species, like biting gnats, which can break human skin. Most gnats don’t harm you in any way.

Are gnats and fruit flies the same thing?

Homemade and store-bought traps can kill gnats instantly. These lure gnats into a solution or surface that kills them right away.

No, dryer sheets only repel gnats, but they don’t kill them.

Alicia Persson is a professional content writer who specializes in home living, real estate, marketing, and product promotion. In addition to her four years of content writing, she has experience in teaching college students, real estate marketing, and blogging in-house for small businesses. She has a Masters degree from the University of Virginia and a Bachelors degree from the University of Mary Washington.

How to Get Rid of Junebugs

If you associate the sound of summer with the constant thud of June beetles hitting your deck or windows, then it’s time to take action. While these light-obsessed beetles may seem harmless to humans, they’re anything but when it comes to the health of your lawn and garden. We’ll tell you how to get rid […]