What is an L-shaped Kitchen Layout?

The L-shaped layout is the most popular kitchen configuration, according to the NKBA 2019 kitchen design trends. But what is an L-shaped kitchen layout? We asked a few top experts to explain this layout and provide advice for using it. After all, just because it’s popular doesn’t mean it’s the right configuration for you. [caption id="attachment_319447" align="alignnone" width="1000"] L-shaped configurations are immensely popular. Image: Svet-Feo/Shutterstock[/caption] Shop These Products Now: Kitchen Wall Cabinet - Faucet

“The L-shaped design consists of two adjoining, perpendicular walls of cabinets that form a formidable 'L' shape,” explains David Shove-Brown, Partner at Washington, D.C.-based boutique design firm //3877. He says its popularity is due to the layout’s adaptability."Typically, one side is dedicated to smaller kitchen tasks and acts as home base for the sink and countertop appliances,” Shove-Brown says. “The other ‘wing’ is oriented for larger, more time-intensive activities, holding the range and refrigerator and offering additional storage.” An L-shaped kitchen layout can also take another form. “There can be one wall with a cooktop and another with the sink,” explains Joan Kaufman, Interior Designer and President of Interior Planning & Design in Naperville, IL. But in this design, the refrigerator may not be in the L. “Often an island is in the center of this style kitchen.” An example of an L-shaped kitchen designed by Kaufman is above.While the kitchen work triangle is efficient, she says that planning for the island is essential to ensuring that the space is efficient. “Determining if an ‘L’ is right for a homeowner will be largely influenced by the floor plan and space availability.”

Michael Radovic, CKD at Showcase Kitchens, admits that he loves L-shaped kitchens because they are efficient and look great. “Being on Long Island, where there are mostly graciously-sized private homes, we typically add a center island, but the perimeter is where all the action is.” Radovic says that it’s preferable to put the sink — and trendy faucet —  in front of a window, as his company did in the design above.And that window can provide an awesome view. “The leg of the L is often along an outer wall and you can create a big picture window to an amazing landscape,” says George Bevan, Principal of the architecture firm Bevan & Associates in Sonoma, CA. “This allows for natural light and complete views of the outdoors.”However, if you want a window behind the sink, understand how this will change the configuration. “It will be an influencing factor in the placement of cabinetry and appliances in your kitchen,” Kaufman explains. [caption id="attachment_319450" align="alignnone" width="1024"] 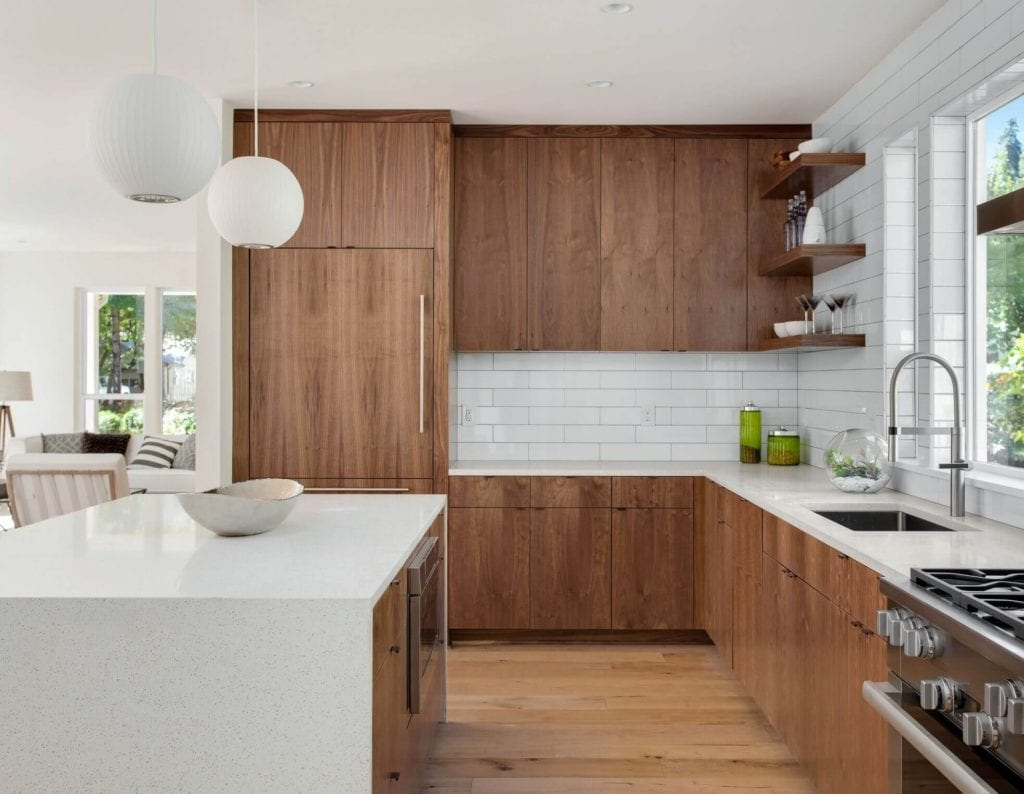 Open concept kitchens remain popular. “The L-shaped kitchen layout provides an easy option for creating a seamless flow between the kitchen and adjacent living spaces,” Shove-Brown explains. It does this by keeping kitchen essentials limited to two exterior walls. “Movement throughout the space is more fluid with this floor plan.”

Chelsea Allard, VP of Design at Case Design/Remodeling in Charlotte, NC, also likes an L-shaped kitchen. “They are common because they can create a nice work triangle between the refrigerator, sink and cooking surface,” she says. “Now more than ever, we’re seeing L-shaped kitchens paired with islands to create separate zones for multiple cooks.” Above is an L-shaped kitchen designed by Allard’s company.Shawn Breyer, Owner of We Buy Houses Atlanta, agrees that most homeowners and designers enjoy the open layout of this floor plan. “It  spreads out the functional work areas to make a kitchen feel less cramped.” [caption id="attachment_319462" align="alignnone" width="1024"] 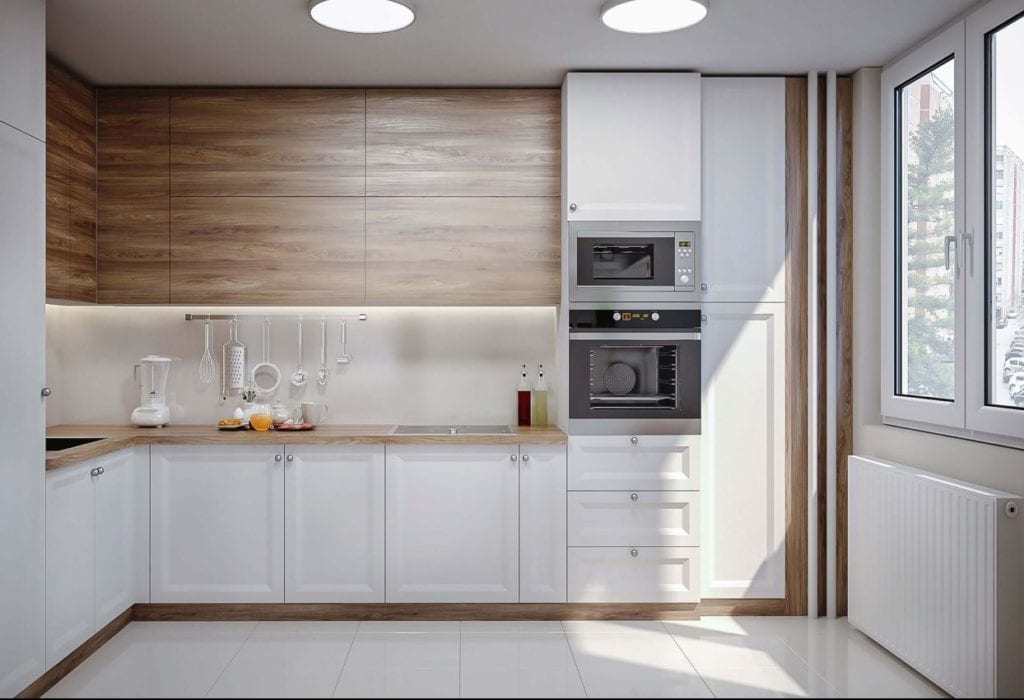 It's great for small spaces

“These kitchen layouts work well in lofts with industrial kitchens and open concept floor plans where the dining room or breakfast nook is incorporated into the space,” according to Ariel Richardson, the San Diego-based Interior Designer and Founder of ASR Design Studio. “It's great for small- to medium-sized spaces where you want the kitchen to feel like it's part of a larger space, such as a dining room and living room.” [caption id="attachment_319458" align="alignnone" width="1024"] 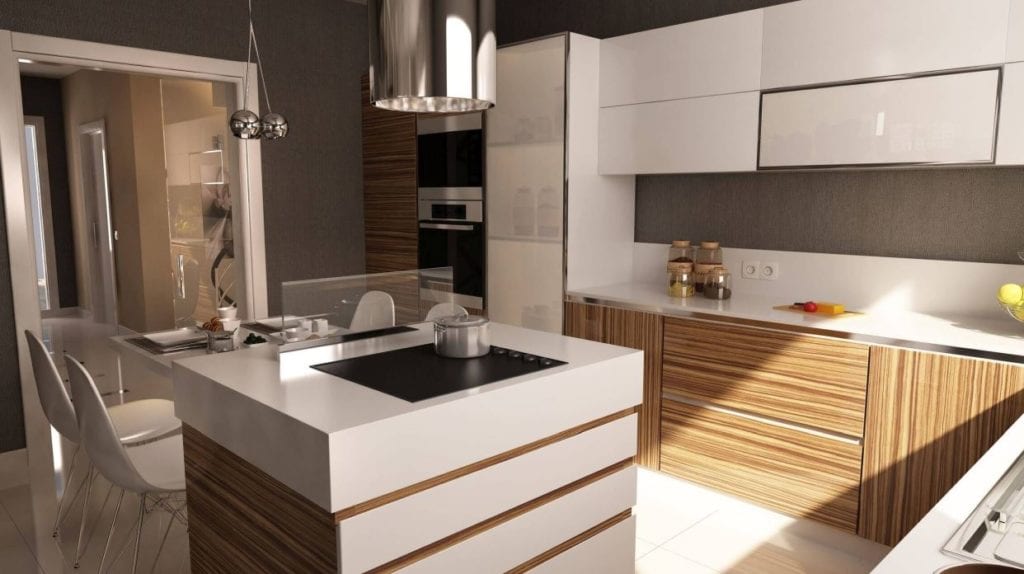 An L-shaped kitchen can also be intimate. Image: jujuenter/Getty Images[/caption] Shop These Products Now: Dining Chair - Induction Burner Shove-Brown says he’s seeing a lot of townhouses and apartment buildings incorporate the L-shaped kitchen concept. “This layout is also great for condos. The challenge is figuring out what people want to see and what people don’t want to see in their space,” he explains. For example, Shove-Brown says that while L-shaped kitchens keep cleanup and cooking areas separate, everything is viewable to the adjacent living spaces. “If you’re comfortable with an uninterrupted flow between each, then an L-shaped kitchen is a great fit.” [caption id="attachment_319454" align="alignnone" width="1024"] 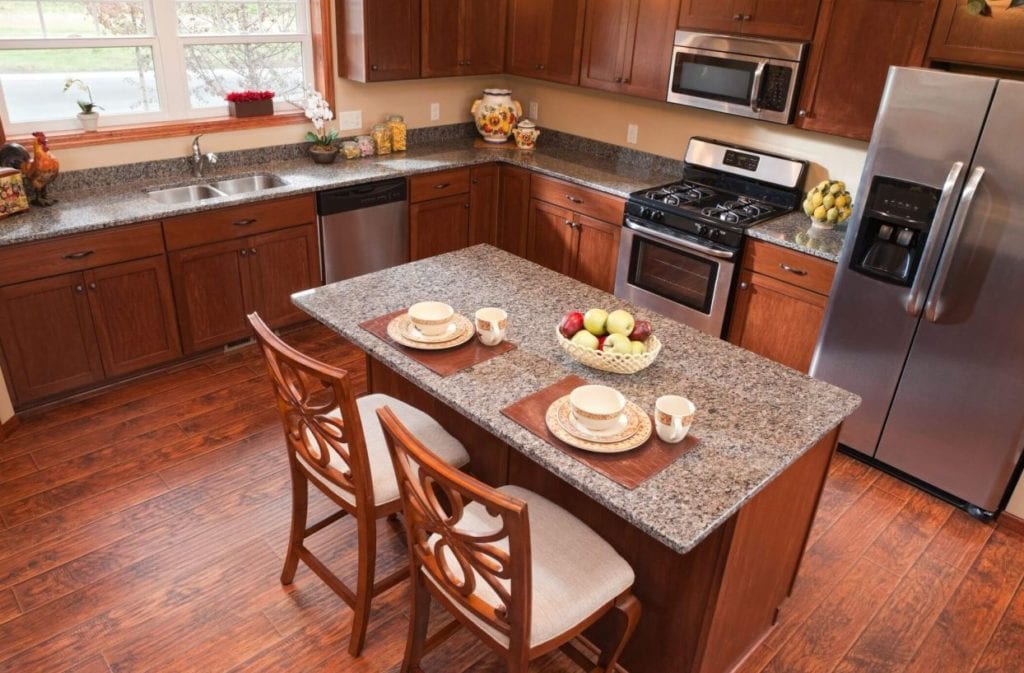 However, there are some downsides that homeowners should plan to address. “In spaces small and large, be aware of the ‘dead zones’ that can emerge from this layout,” Shove-Brown warns. “In many instances, the corner space isn’t utilized properly." He says the area is not quite equipped for active use, but also not quite right for storage. If possible, Shove-Brown recommends limiting the size of this zone. [caption id="attachment_319455" align="alignnone" width="1024"] 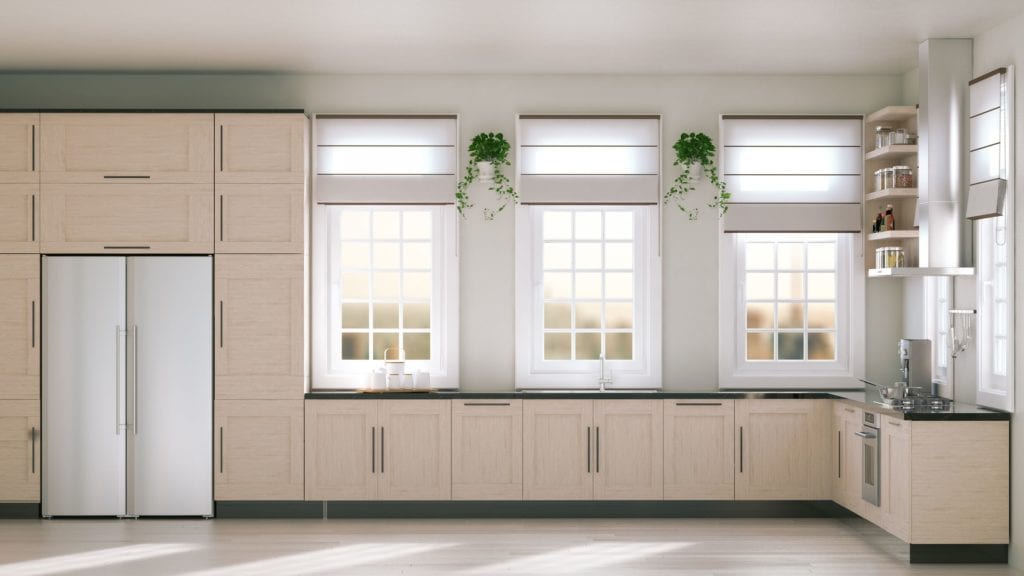 Don’t place work areas too far away. Image: BenAkika/Getty Images[/caption] Shop These Products Now: Kitchen Cabinets - Wall Planters And if you don’t add an island, Breyer notes another issue. “The problem with the L-shaped kitchen comes when the functional areas are too spread out, making the workspace inefficient.” He says an island — even one on casters that can be moved — can shorten the distances between work areas. [caption id="attachment_319456" align="alignnone" width="1024"] 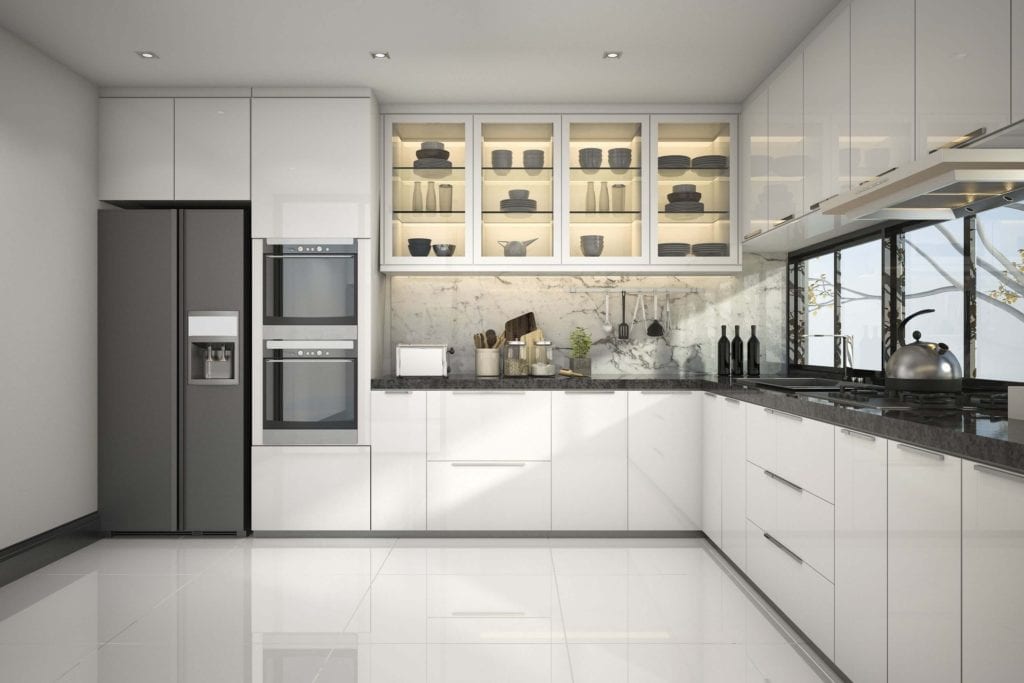 Appliances can also be too close. Image: dit26978/Getty Images[/caption] Shop These Products Now: Utensil Holder - Tea Pot However, sometimes there’s not enough distance. “In small L-shaped kitchens, the appliances can be too close together to provide any effective prep space," Allard explains. She points to restored ranch homes that didn’t have an original dishwasher or microwave as an example. "In those cases, lengthening one side and adding an island can help to stretch out the zones, making them more appropriate for the way we move today.” [caption id="attachment_319457" align="alignnone" width="1000"]

L-shaped kitchens can be more expensive than galley configurations. Image: Artazum/Shutterstock[/caption] Shop These Products Now: Side By Side Refrigerator - Kitchen Backsplash Nathan Outlaw, President at Onvico, a general contracting and design-build company in Thomasville, GA, points out two additional cons. “Compared to a galley kitchen, an L-shaped kitchen is more expensive, due to the extra complexity with cabinets and countertops and possibility of an island.”And while some families love open concept styles for maximizing social interactions, that can also be a drawback. “Sometimes an L-shaped kitchen can be too inviting, making it harder for the cook to ‘kick’ someone out,” Onvico says.