Your Guide to Moving to Portland

Moving to Portland at a glance:

Moving to Portland: The basics

What’s the population of Portland?

According to the last U.S. Census count in 2019, the population of the city of Portland was 653,115, so the city has grown a lot since then with more than 840,000 residents. Young professionals flock to the city, making Portland’s median age about 37, with 69% of the population between the ages of 18 and 64.

Currently, the gender split in Portland is pretty even. And if you’re moving to Portland and looking for love, you’re in luck. About 57% of the city’s residents are single. 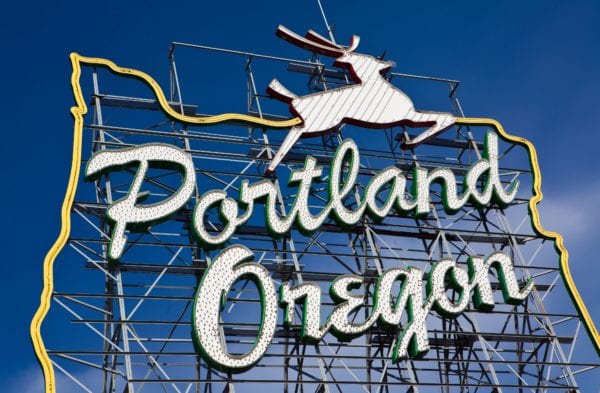 What is the cost of living in Portland?

The cost of living in the city is 16.8% higher than the national average across-the-board. Housing costs are a key factor driving up those costs. In fact, the average home price is $621,629 — significantly higher than the national median of $248,857 according to Zillow (though, it varies by state). The average rent is also higher in Portland, coming in around $2,530/mo.

Groceries also tend to be on the more expensive side compared to other places. When walking down the grocery store aisle, expect to pay $4.36 for a loaf of bread, $1.59 for a half-gallon of milk, and $2.04 for a dozen eggs.

But incomes are generally higher in Portland. The average salary in the city is $52,296.

See below how Portland stacks up compared to other similarly-sized cities in the U.S., and major metropolitan areas, such as New York City.

After a period of good job growth in 2019, Portland is expected to experience slower job growth in 2020, according to the Portland Relocation Guide — likely adding approximately the same amount of jobs as last year. However, Portland’s year-over-year job growth is 2.04%, which is 7% higher than the rest of the U.S. This makes the city an attractive place for new talent.

The unemployment rate dropped to 3.7% in December 2019 — the lowest since 1976, according to the Oregon Employment Department. But, that was before the global impact of the coronavirus hit the U.S. Like most everywhere in the country, unemployment rose due to COVID-19. The latest July numbers show an unemployment rate of 11.0% — which was slightly higher than the national unemployment rate. This is important to keep in mind if you’re thinking of moving to Portland.

Portland is known for its diverse industries, ranging from manufacturing, tech, and healthcare, to outdoor and athletic apparel. The education sector is also a major employer. Some notable Fortune 500 and Fortune 1000 companies in Portland include Nike, Columbia Sportswear, Berkshire Hathaway, Greenbrier Cos., and Portland General Electric.

What do I need to know about Portland education?

According to Niche, PPS ranks at 60% proficiency in reading and 49% proficiency in math, and the average graduation rate for Portland high school seniors is 78%. PPS offers a good array of extracurricular and after-school activities, and there are many pre-K options for young parents.

There are also 11 charter schools, 125 private schools, and 34 higher education institutions in Portland.

What are the safest areas in Portland?

The three safest neighborhoods in Portland, according to NeighborhoodScout, are:

This is only a high-level look at the crime statistics in the city. If you want to learn more about safety in the area, be sure to visit the Portland Police Bureau website for more information.

How do I get around Portland?

TriMet is the city’s premier public transportation provider, with a convenient network of busses, light rail, and streetcars. If you live and work within Portland city limits, you don’t really need a car, as the transportation system will get you where you need to go.

The average commute time by car in Portland is about 27 minutes. But, keep in mind that in Portland, not everyone commutes by their car. In 2017, 8.9% of people carpooled, 12.3% took public transportation, and 6.5% of commuters rode their bikes to work.

Portland is well-known for having more rainy than sunny days. However, the climate is temperate, with warm, dry summers, and mild, wet winters. Thanks to its location at the confluence of the Willamette and Columbia Rivers, it lies in a low altitude location, a short distance from both the Pacific Ocean and Cascade Mountains.

What are Portland’s fastest-growing neighborhoods?

Portland has gained a lot of popularity over the last decade or so and it still continues to be a fast-growing city. When moving to Portland, there are many different neighborhoods and suburbs to consider. According to RealEstateAgentPDX and WestCoastSelfStorage, these are the fastest-growing:

As one of the city’s trendiest neighborhoods, “The Pearl” is located in inner Northwest Portland, just north of downtown. The last few years have seen exponential growth in condos and high-rise apartment buildings. It’s very convenient to public transportation and great shopping, plus it’s the central hub for art galleries in town. 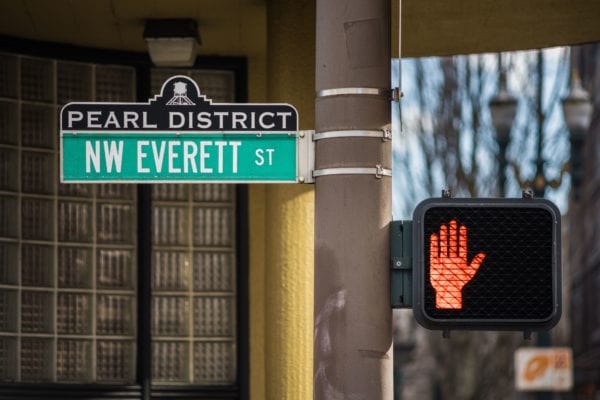 Located in Portland’s far east side and neighboring the suburb of Gresham, this neighborhood has seen just as many homes sold as the Pearl District and has a population of about 25,000. However, its outer-lying location means you are more likely to need a car to get around.

This neighborhood lies just to the southwest of Centennial, with a similar population of just over 24,000. While it is slightly closer to good shopping and other cultural attractions, a car is always handy.

This neighborhood is located in central southeast Portland, bordering the I-205 corridor. As such, it’s very convenient to hop on the Interstate to get to other parts of the city and has lots of transportation options.

In the greater Portland metro area:

This suburb with an idyllic name is located just southeast of Portland, and it has grown a full 46% since 2010. The commute time to downtown Portland is roughly 23 minutes, depending on traffic.

Conveniently located south of Portland and straddling Interstate 5, Wilsonville is an easy commute into the city (25 minutes from downtown) and all of its dining, shopping, and culture. This former farming town has seen tremendous growth in new single-family homes, with a 23.2% growth over the last ten years.

Hazelwood, about a 13-minute drive east of central Portland, is a growing neighborhood of about 25,000 people. It is one of the largest neighborhoods in Portland. Despite having a suburban feel (which many buyers find desirable), Hazelwood is still very well connected to public transportation.

Living in Portland: The fun part

If you love basketball, you are in luck: The world-famous Portland Blazers make their home here, and having a season ticket to their venue at the Moda Center is high on a sports fan’s list. Soccer fans will find their home in the Portland Timbers (men’s) soccer league, and Portland Thorns (women’s) soccer league. Hockey fans can enjoy watching the Portland Winterhawks, and baseball fans can watch the collegiate Portland Pickles, as well as the minor league Hillsboro Hops.

There is no shortage of culture in Portland, whether you’re a fan of theater, live music, or the traditional arts. Some notable theaters are the Arlene Schnitzer Concert Hall, Portland’s Center for the Arts, and Keller Auditorium. There are currently 36 museums, 73 music venues, and 18 libraries. Travel Portland is the city’s premier publication for culture.

Families with kids will enjoy Portland’s 328 city parks, the Portland Japanese Gardens, the Oregon Museum of Science and Industry (OMSI), and the Portland Zoo.

Any foodie will rejoice at living here, as you can literally take a culinary adventure around the world in Portland. There are restaurants, pubs, and bars to suit any taste and budget, from the affordable and eclectic, to Michelin-star establishments. There are also 99 breweries. Make sure to also explore the plethora of incredible food carts scattered throughout the town. PDX Eater is a wealth of information.

For those who love to explore, Portland is uniquely situated: It’s a short, 1.5-hour drive to the Cascade Mountain range to the east and the Oregon coast to the west. Seattle is also only a 3-hour drive away, so you can explore so much by car alone. And if you want to board a flight, Portland International Airport is located just 14 miles east — about a 20 minutes’ drive from downtown.

Portland is a mecca for outdoor enthusiasts. Mt. Hood, located in the Cascade Mountain range, offers world-class skiing and other winter sports, Forest Park is Portland’s largest urban green space, with many miles of forest hiking to enjoy. There’s a wide variety of outdoor activities to keep you exploring for years, from waterfalls and high desert surroundings in eastern Oregon to the rugged Oregon coastline. 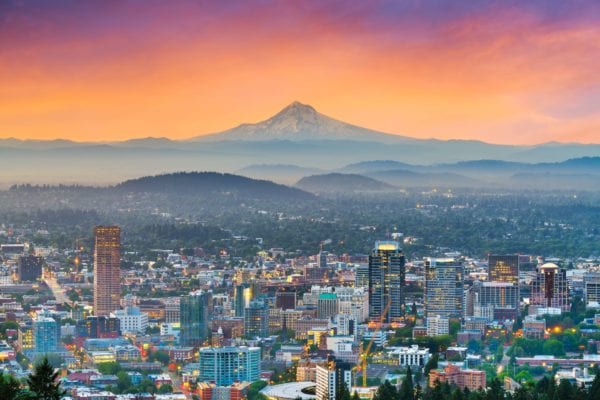 What you probably didn’t know about Portland…

If you’re interested in moving to the area, check out our city page on Portland!

While this guide to Portland is helpful, it only scratches the surface. Some local publications you may want to explore are Travel Portland, Willamette Week, and The Oregonian. They will give you a deeper sense of what Portland is really about.

Portland is a beautiful and friendly place to live. With its large number of green spaces, its wide array of cultural and outdoor activities, and its world-class food scene, Portland should be high on your list if you’re looking for a new adventure or a fun place to call home. Though, keep in mind that the cost of living continues to go up, and the population is rising, too.

Hana LaRock contributed to this report.

Susan Stephens is a scientist-turned-travel writer who has lived in Portland for 25 years. Originally from the Midwest, she has made it her mission to explore every part of Oregon, Washington State and British Columbia. Her adventures are chronicled on her travel blog, Explorer Sue. When she’s not traveling, she is going to alternative music shows, hanging out with friends and writing women’s fiction.
Save on your move and tackle upcoming to-dos with your free MYMOVE account
By signing up, you’re opting in to receive email communication from MYMOVE.com and agree to MYMOVE’s Privacy Policy and Terms of Use.